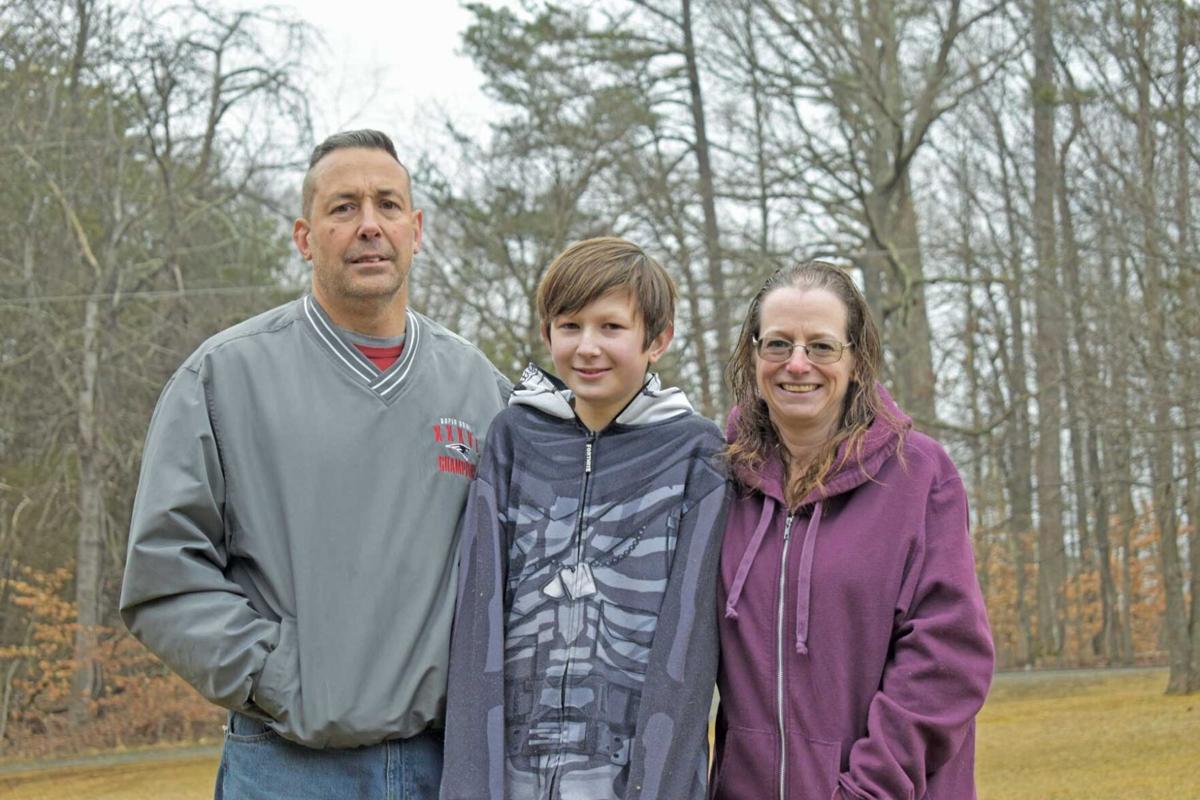 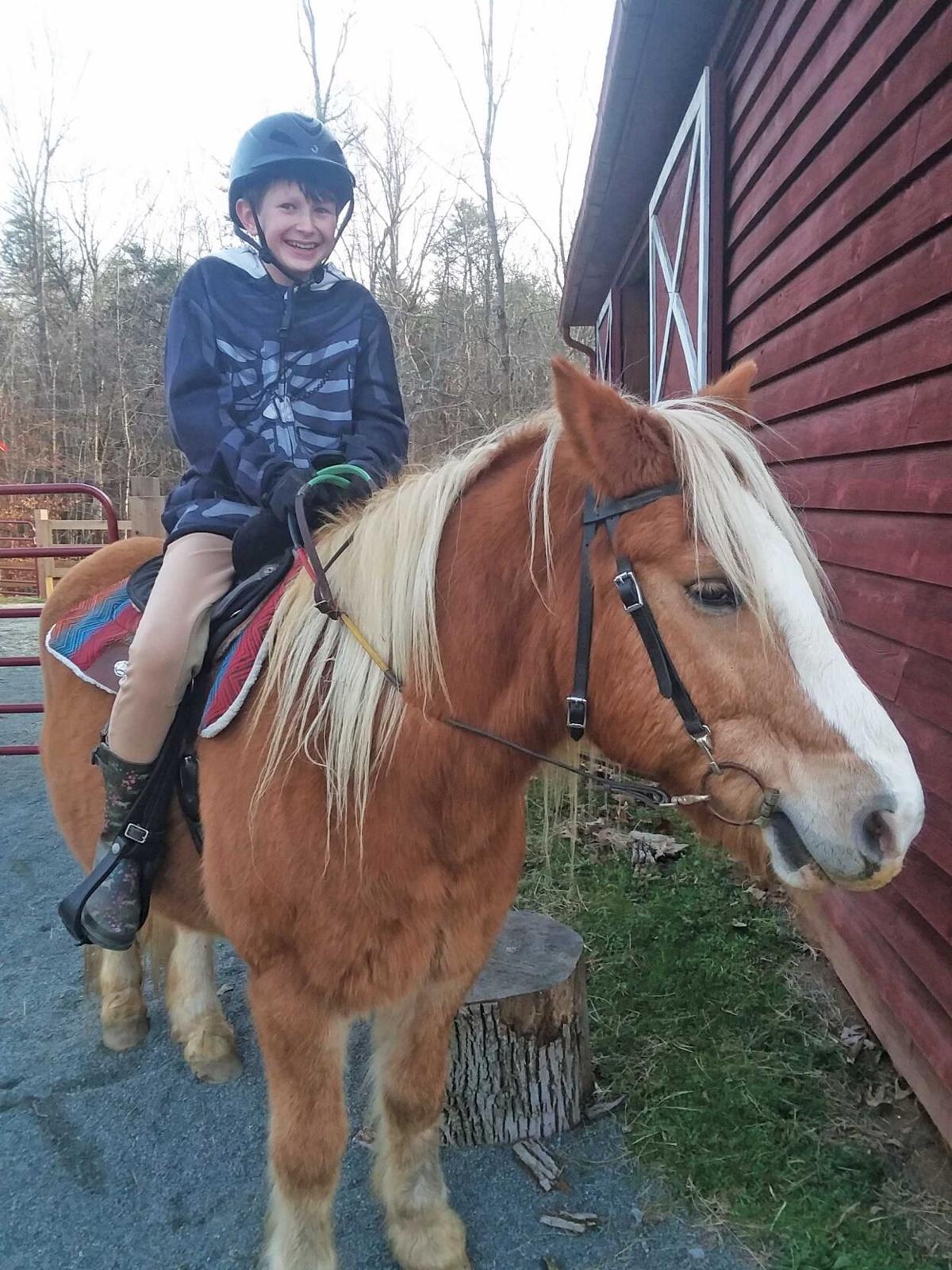 Although Tyler Hanf, 12, of Franklin County was diagnosed with a rare disease called fibrodysplasia ossificans progressiva (FOP) that causes parts of his body turn into bone, that doesn’t stop him from riding his horse, Charlie.

Although Tyler Hanf, 12, of Franklin County was diagnosed with a rare disease called fibrodysplasia ossificans progressiva (FOP) that causes parts of his body turn into bone, that doesn’t stop him from riding his horse, Charlie.

There are under 1,000 known cases of fibrodysplasia ossificans progressiva (FOP) worldwide, and one of those diagnosed with it is a 12-year-old boy in Franklin County.

FOP, one of the rarest, most disabling genetic conditions in the world, turns muscles, tendons and ligaments into bone, and those bridges of extra bone move across the joints in the body, which restrict movement.

According to the International Fibrodysplasia Ossificans Progressiva Association, FOP is basically a healthy mind that is imprisoned in a frozen body. There is no cure for it.

Tyler Hanf, who is 12 years old and attends Benjamin Franklin Middle School in Rocky Mount, was diagnosed with FOP in fall 2020. From the moment he was born, the symptoms of FOP were visible on his toes, which looked abnormal.

“We thought that he just had these bumps that looked like bunions that he was born with on both of his big toes,” said Tyler’s mom Kim Hanf. “Everybody told us that it was no big deal.”

When Tyler was six weeks old, he developed three lumps on his head, and doctors discovered through diagnostic tests that he developed a lump in his clavicle. A doctor told Tyler’s parents that they believed the lumps were a case of cranial fasciitis. This is a rare benign tumor of the skull that occurs in children younger than 6 years old, according to ajnr.org.

The doctor recommended they be removed because the lumps were pushing into his skull and denting it. At three months old, Tyler had surgery to have the lumps removed, but they shortly grew back and went away on their own.

His symptoms wouldn’t go away. Instead, they started to become more visible. Last year, Tyler wasn’t able to move his head side to side anymore. If he wanted to move his head, then he had to turn his shoulders to the side as well. More lumps started to form as recently as last fall.

A few days before Labor Day last year, after playing cornhole, Tyler developed a large swelling on his back that was the size of a football, which again had his parents concerned about what was happening. The doctor they visited told both Kim and her husband Mike Hanf that they needed to get Tyler to the University of Virginia hospital because she felt it could be an emergency situation with his muscles starting to become rigid, which could impact his breathing. Their trip ended with the same old song and dance: no answers and being told there wasn’t anything serious going on with Tyler.

Still, the message was the same: Tyler’s condition was unlike anything the doctors, orthopedics or specialist had ever seen. With only one in two million born with FOP, the chances that any of the doctors would see cases like this is slim, which explains why they were baffled over Tyler’s condition.

“You wouldn’t believe how many times we were told by them that they have never seen anything like this before,” said Mike Hanf. “‘We have no idea’ were the words that kept coming out of their mouths.”

Once the results of the neck and back MRIs came back, the orthopedist had some concerns and sent him to a geneticist in Roanoke. Once the results of the brain MRI came back, Kim Hanf got a call from the geneticist, who told her that there was some abnormality and said the radiologist had never seen anything like it before. The geneticist sent the films to UVA, where the neuroradiologist made a diagnosis. Kim Hanf said the geneticist looked up the symptoms and confirmed that it fit with Tyler’s.

“I was completely blindsided to get such a diagnosis,” said Kim Hanf.

Having a genetic test done to confirm the diagnosis, Mike and Kim Hanf said they were told by a doctor that the DNA of those with FOP shows that one of the six billion letters of genetic code is out of place, which causes this rare disease.

Although Mike and Kim Hanf spent 12 years trying to figure out what was going on with their son, which can be frustrating, they are far from alone on that end. In fact, misdiagnosis happens all the time for those with FOP, and one misdiagnosis of FOP is well known around the world.

Now knowing what he has and will live with the rest of his life, Tyler doesn’t let it get to him. He makes it clear that he doesn’t live in fear but acknowledges he does have some struggles in his personal life.

“It’s hard to move around and do a lot of things, like putting on my shirt or sweatshirt because I can’t reach around or over my head,” Tyler Hanf said.

It wasn’t until a month ago when Tyler was able to put a shirt on by himself since losing the mobility in his shoulder blades just before Labor Day. He saw his parents outside with his neighbors and wanted to join them, but because he was so use to his parents helping him dress, he had to figure it out by himself with dressing sticks that he has. It took him a while, but Tyler was able to figure it out and dress himself.

He also faces some issues with one of his knees, which will lock up if he bends it more than 90 degrees. To work it out, Tyler will walk on his knees or hop to the stairs. He mentioned his knee will also lock up every morning when he wakes up because of how he sleeps.

When it comes to showering, Tyler mentioned he can’t wash his hair or his back because of his limited motion, but they are currently trying to find ways for him to be able to do so.

As far as his social life, Tyler says he has no problem at school and says his classmates don’t treat him any different or even ask why he is physically limited in some ways. He can’t take any physical education due to the risk of falling and causing trauma.

“The only real thing it impacts me at school is reaching up and in front of my desk,” Hanf said.

One of Tyler’s favorite hobbies is building Legos, which he has scattered on the family’s ping pong table. He has a grabber that he uses to reach for Lego pieces that are a little bit out of reach on the ping pong table and scrapes it toward him.

“Legos and video games are my escape from everything,” Tyler Hanf said.

Tyler also said he likes to ride his horse, Charlie, which he can still ride even though he struggles to get on at times. Kim Hanf said their horse is incredibly patient with Tyler and is always so gentle around him.

He talked about his desire to be a game warden when he grew up due to the TV program called Northwood’s Law, but knew his limitations wouldn’t make that possible.

With Feb. 28 being Rare Disease Day, Kim Hanf said her biggest thing now is she wants people to learn about the rare disease and how it impacts those who live with it. Mike and Kim Hanf plan to do a fundraiser at the end of April, which will include free pony rides, free yard games, a yard sale and a bake sale, which will be called Family Funday for Tyler. Anyone who is interested in the fundraiser can look it up on Facebook under “Riding for Tyler #cureFOP.”

At the end of the day, both Mike and Kim Hanf just want their son to maintain his personality and to never lose it during his journey with FOP.

“He’s just so fun, smart, upbeat and never lets this get him down,” Kim Hanf said. “No matter what mobility he loses, there’s always a way to adapt and to still do fun things.”

Even with this rare disease, Tyler Hanf doesn’t try to advertise it or gain sympathy. Instead, he wakes up every day for school, gets on the bus, and goes about his school day without ever thinking of his condition, and he wants to keep it that way.