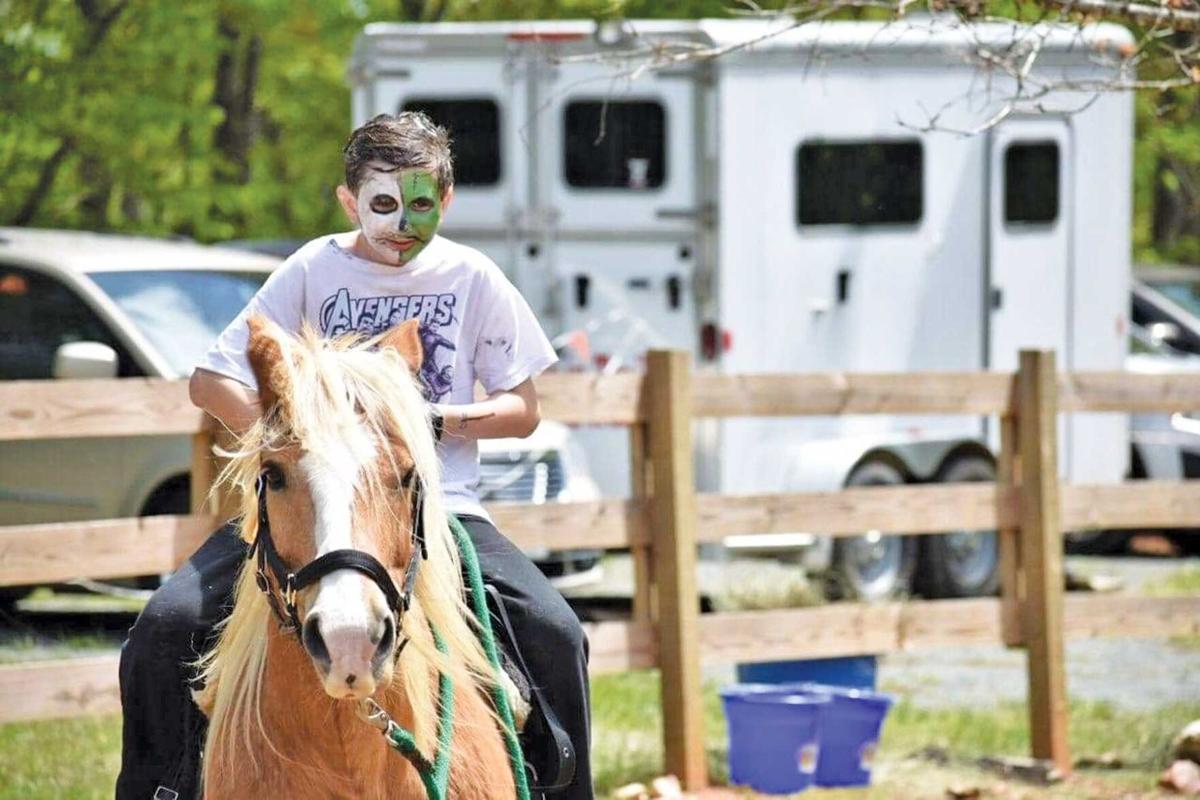 Tyler Hanf, who was diagnosed with one of the rarest diseases known to man called Fibrodysplasia Ossificans Progressiva (FOP), rides a horse at the Riding for Tyler #cureFOP event Sunday in Moneta. 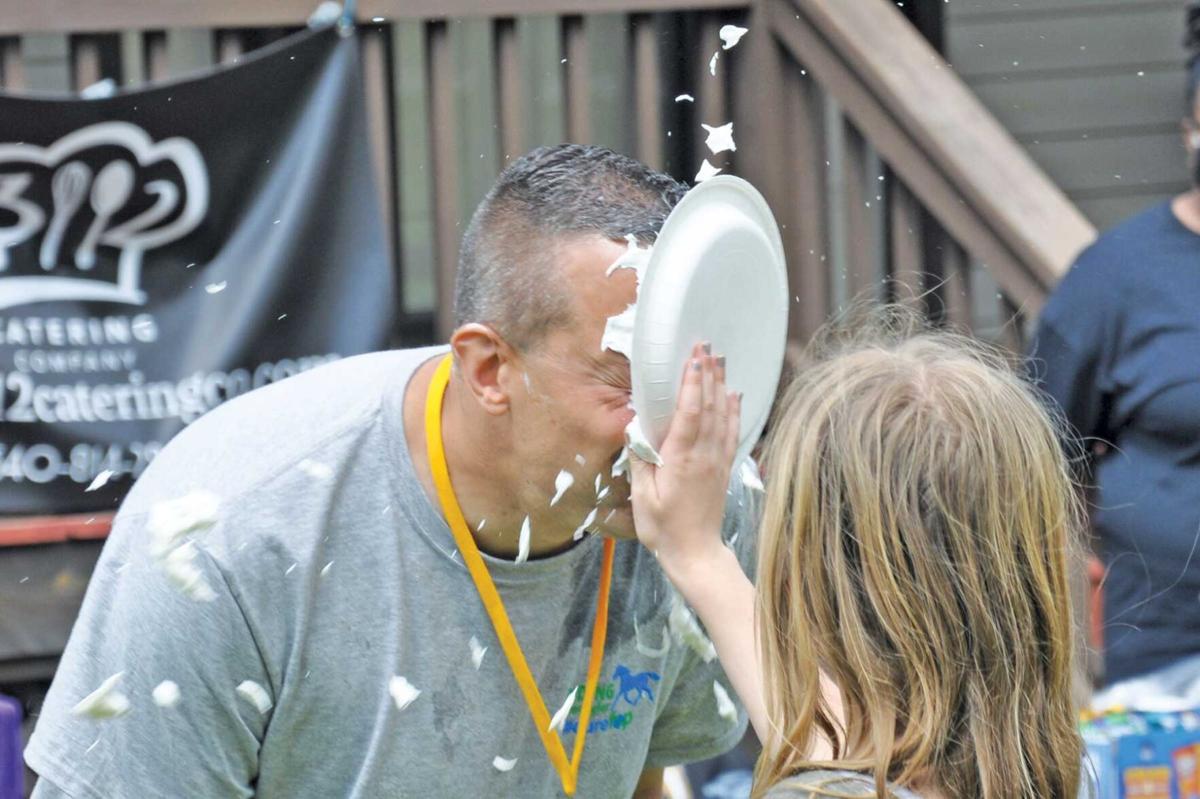 Kate Blankenship puts pie in the face of Tyler Hanf’s father, Mike Hanf, at the Riding for Tyler #cureFOP event Sunday in Moneta. 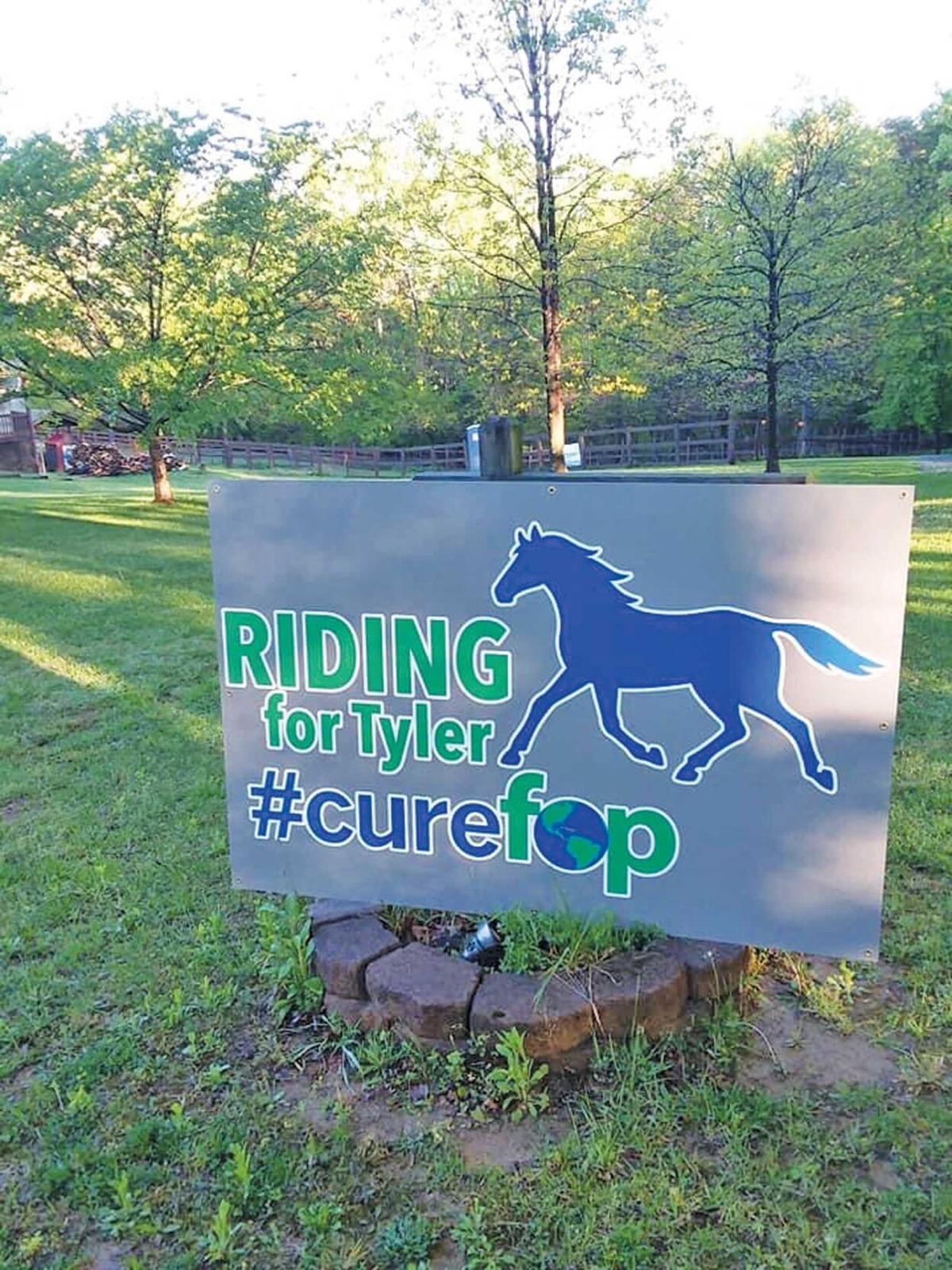 Shown is the sign for the Riding for Tyler #cureFOP event Sunday in Moneta.

Tyler Hanf, who was diagnosed with one of the rarest diseases known to man called Fibrodysplasia Ossificans Progressiva (FOP), rides a horse at the Riding for Tyler #cureFOP event Sunday in Moneta.

Kate Blankenship puts pie in the face of Tyler Hanf’s father, Mike Hanf, at the Riding for Tyler #cureFOP event Sunday in Moneta.

Shown is the sign for the Riding for Tyler #cureFOP event Sunday in Moneta.

More than 400 people showed up to the Riding for Tyler #cureFOP event Sunday in Moneta and enjoyed a variety of activities such as face painting, horse riding, cornhole, frisbee and more.

Back in November, Tyler Hanf, who attends Benjamin Franklin Middle School, was diagnosed with one of the rarest diseases known to man called Fibrodysplasia Ossificans Progressiva (FOP). With less than 1,000 known cases worldwide and one in two million people per birth, the chances anyone comes across an individual with FOP are slim to none.

Hanf’s parents, Mike and Kim Hanf, knew that FOP didn’t get the recognition or awareness it needed, and they can speak on that from their own personal experience visiting multiple doctors, physicians and other medical experts to get a proper diagnosis on Tyler Hanf’s condition. For the past 12 years, they received the same news that Tyler Hanf’s condition was unlike anything they had ever seen, which left them flustered. It wasn’t until a suggested brain MRI from Tyler Hanf’s physical therapist that finally paved the way to his eventual diagnosis of FOP.

With this in mind, they brainstormed events and fundraisers to help spread awareness for FOP. Kim Hanf mentioned that at first, she thought of doing a group trail ride with her horses, but Mike Hanf suggested that they do pony rides at their house and invite the community. Then it grew into a yard and bake sale, and it just kept expanding.

“Somehow, it just exploded from there,” Kim Hanf said.

Mike Hanf then asked local businesses and restaurants if they want to help with the event, which now had a name: Riding for Tyler #cureFOP. The response he received was overwhelming, and the venues that were present at this event spoke for itself.

Of the 400-plus people who showed up, some were kids from Tyler Hanf’s school. One of Tyler Hanf’s friends, Evan Lynn, set up a lemonade stand to help raise money. He made more than $160 in lemonade sales.

3112 Catering Company was there to cater food for the event, and those who came also had the opportunity to receive a massage from Candi Ahlbrandt, who owns Massage Works. She donated every penny she made from massages to Tyler Hanf’s event.

What brought in the most money were raffle tickets, which were purchased for a chance to win prizes that were personally donated. Some of the prizes included a spa bas- ket, $50 Old Oak gift card, SML pendant, two passes to the Virginia Dare and much more.

Tyler Hanf’s aunt, Sheila Gleba, and her boyfriend, John Dolim, made the trip from Massachusetts and watched over the raffle sales as well as setting the whole thing up. With this being Tyler Hanf’s first big event with FOP, both of them knew they had to be there to support him.

“I told Mike that there was no way we were going to miss this,” Dolim said.

Both Gleba and Dolim emphasized just how nice and supportive the Smith Mountain Lake community was to them during their stay and to Tyler Hanf when he received his diagnosis.

One of the biggest treats of the event was the old fashion pie-to-the-face, which featured Mike Hanf and some of his coworkers from Dudley Elementary School, who came out to support Tyler Hanf. Mike Hanf received the most pie to the face.

The amount they made from the day wasn’t disclosed, but both Mike and Kim Hanf said that their expectations were completely blown out of the water. The funds will go toward Tyler Hanf’s future medical expenses.

Both Mike and Kim Hanf were grateful for the abundance of support they have received from coworkers and the community since their son was diagnosed with FOP half a year ago. They could see that the SML community was tight-knit and supportive when they moved here two years ago from New Hampshire, but now experiencing it for themselves has left them nearly speechless.

“It really helps through the downs knowing that so many are thinking about us and praying for us,” Kim Hanf said. “It really just makes a difference for us during this journey.”

After three months of putting the event together and seeing the positive outcome it had, both Mike and Kim Hanf said this will be an annual event, and they may hold smaller events throughout the year as well. Mike Hanf said the next Riding for Tyler event will be bigger and better than this one.

As for the man of the hour, Tyler Hanf, seeing his friends from school and lots of people come out to support him as he lives with FOP helps make the journey a little smoother for him.

“It makes me feel good that so many people care,” Tyler Hanf said.